We all get the feeling now and then that we’ve drifted too far away from nature and that’s probably the reason to why depression is becoming more and more common in society nowadays.

We all love a majestic view from a great mountain or massive river, but can we really appreciate it to 100% without ever stepping a foot outside the realms of smartphones? Can we appreciate a picture from a mountain as much as standing there looking down over the mountain’s body which we just climbed?

I guess it remains to be seen. I know for a fact that I appreciate nature more than anything else, probably because I come from the northern parts of Scandinavia where nature is constantly present, a place where you have to live with nature whether you like it or not.

You can witness the beauty of nature in many ways. You can get a majestic feeling from being in the woods, from watching the horizon over a wild sea or from sitting on a mountain top while looking out over the vast landscape as any other semi-god.

One who never climbed a mountain has probably no idea of what I’m talking about but I know that some of you probably recognize themselves. Reaching a mountain top can take many hours or even days in some cases. But don’t let that beat you down because just like everything else, the more effort you put into it – the greater the rewards you get.

That is the reason to why it’s impossible to compare a picture from a mountain top with the real deal. Spending time at a mountain top is extremely fulfilling if you climbed it yourself.

Everything that is bigger than ourselves can fill us with awe. Our DNA has already witnessed most things on earth, but still, we easily become mesmerized by the things that are more powerful than ourselves. Massive oceans and rapid streams are a part of the greenhouse effect as more and more ice is melting to gradually fill up our oceans and rivers, big and small.

The melting snow from mountains forms bigger streams where salmon come every year to reproduce and many animals are depending on the salmon to eventually show up. A big stream of fresh water can be enchanting and incredibly unforgiving in the north of Scandinavia. 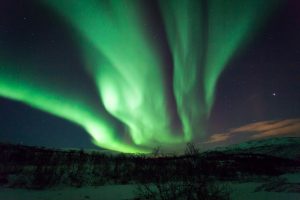 We see people pass by and watch things happen every day, different and weird things. But not many of them are “real”. I’m talking about life-and-death real. In nature, there’s a big chance that you will actually see power struggles between species or even animals protecting their young ones.

Although I like to believe that our lives in the smartphone matters, they are not equally “real” as the nature outside is. It’s not rare to watch animals fight over a caught fish or bird eggs, I guess it depends on where you are camping. 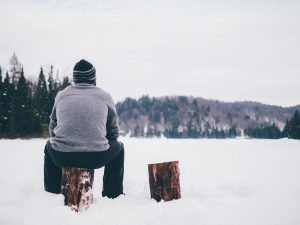 You will notice that the air starts getting cleaner and the stars shine brighter at night as soon as you start moving out from the city towards the real nature. The air can be felt both day and night; while the reduced light pollution can be noticed mostly at night.

The fact that you breathe fresh air and see the nature clearer allows you to quickly adapt to camping outdoors. This can be experienced the most by taking a flight to a northern location with as little air pollution as possible.

The light pollution from cities doesn’t only destroy the beautiful view of the stars, it also prevents the northern lights (Aurora Borealis) from showing up in the same extent as in the north of Scandinavia.

Bring a cell phone but keep it off. It’s not vital for people to be able to reach you since any issue can wait until you get back from the camping trip. The sound notifications of our mobiles, tablets, and computers are disrupting the momentum of our daily life.

Speaking with people nowadays is not the same as it was a couple of years ago, it now seems impossible to maintain 100% of the participant’s focus throughout a complete conversation. Make sure that you don’t infect your camping trip with unnecessary sound notifications during your stay in nature.

You want to avoid using your battery until you actually need to make a phone call during the trip. Hopefully, everything goes as planned and you will not have to make any phone calls at all. 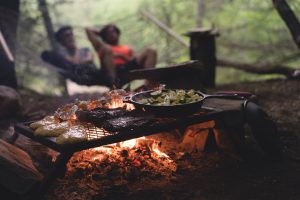 Aristotle claimed that a happy man is a self-sufficient man. Ultimately, we came from being self-sufficient tribes who eventually made ourselves dependant on each other. It’s weird how we still do that, it is very common for people to pay for each other’s drinks at the pub – an attempt to increase the value of a relationship.

It’s natural for us to do so, but it is a luxury that came from our great progress in evolution over time. Deep down, however, we come from being self-sufficient individuals and I believe that it’s important to try to rediscover that every now and then. Set up a camp, start a fire, hunt for food and live off the land where you camp. The sooner you start, the better you’ll feel. I guarantee it.

Being self-sufficient is actually a really important feeling to have felt at least once during a lifetime. It is, however, worth mentioning that many of us actually never experience it in their lives. I’ll end this article by quoting Bob Marley:
“In this great future, you can’t forget your past” 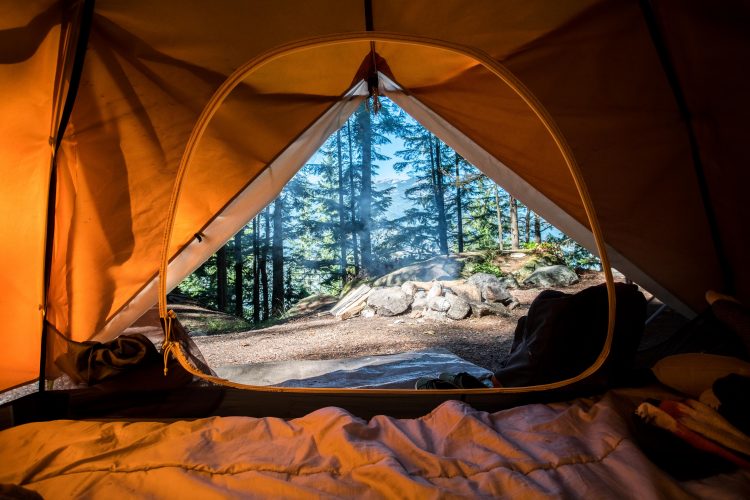 Camping is life! It’s a great part of it at least. But before you head off towards your next adventure, check out this article to double check that you didn’t forget anything important. There are probably other things to bring too apart from the 6 listed items below, but these are the ones which I find most essential when camping for a week or more in the Scandinavian forest.

I try to be as self-sufficient as possible whenever I go out on a camping trip, that’s how I try to educate the people around me too. I generally dislike when people around me are depending on me simply because I want them to be able to live like they want to, with or without me around them.

It’s wise to bring a good friend on a camping trip, the company is important as you will affect each other more than you think. Most of the below-mentioned items can be bought at online camping hear stores, like Decathlon. 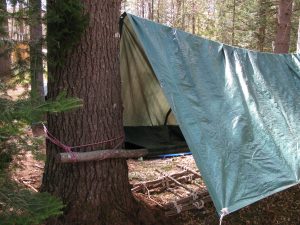 Are you planning to bring a tent or are you going to create your own camping site with tarp and rope? A tent might weigh too much if you’re planning on going far so it’s actually a smart move to use tarp if the weather conditions seem to allow it. It’s important to bring an axe or heavy knife so that you can use branches and wood to create your shelter.

Having a fire nearby allows you to stay warm while keeping animals away from your temporary home. You should have a good idea about how you can build a camp before you start. Paint a picture in your head before you set up the camp and only start once you know how you’re going to set it up.

A sleeping bag is essential to bring on a camping trip while a pillow is a luxury. You can bring it, but there are will always be other more vital items to bring instead. 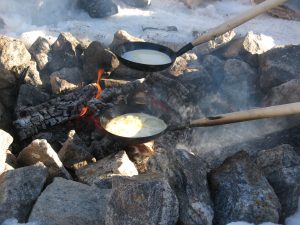 You probably plan to catch something to eat in the wild or maybe you brought all of your food with you? Well, either way – you need to cook it. The water that you find in the Scandinavian streams are clean in general, but one can never know for sure so you should definitely boil all water that you collect before drinking it. In order to boil/cook anything, you need a pot with a handle or create some sort of handle yourself in nature. At least one spoon will be necessary for eating your meals in the wild.

You definitely need a knife, especially if you didn’t bring an axe. The knife allows you to quickly gut fish or adjust a camping site made of rope and tarp.

If you go camping, always bring a minimum 2 pairs of everything. Why? The weather might get you wet, falling into a stream or by accident – your tent might get a scratch and start to leak water.

You need to be prepared.

Duct tape can repair most broken things, which can save you lots of energy if it enables you to stay healthy. Try to prepare a drying device so that you can dry any clothes if they happen to get wet, proactivity is very valuable in the unforgiving nature.

Your socks should ideally be made out of wool as cotton entraps moisture which oppose to warm feet. Try to use a thin layer of socks and one thick layer outside at the same time, the friction make your feet warmer while 2 pair of socks allow the friction to be present without giving you blisters.

There is a ton of equipment to use if you go out camping in the nature. It all depends on where you’re going and what you plan to do there. Binoculars are neat to have if you plan to go camping along a mountain while it might seem worthless from the middle of a valley.

A camera will allow you to save every moment while it usually allow you to zoom too, so binoculars might not be needed if you have a good camera. If you plan to go to a big wildlife area, it’s very wise to bring a map and a compass in case you get lost.

A compass and a map can quickly help you to navigate through snowfall, rain and heavy wind. A flashlight is a luxury, therefore not essential. Bring a couple of lighters and preferably some tinder bundle too for extreme situations. 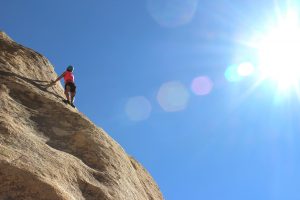 It’s important to remember that you’re going camping to have fun. You aren’t going for the solitude exclusively.

Don’t forget the essential items, but also try to bring something to erase boredom with. Cards, board games, and a healthy imagination can allow you and your friends to kill time when the rain is falling down on your tent for days.

The fun stuff doesn’t have to be brought to the wild, the fun is already there and you can create your own happiness tools if you are handy enough. 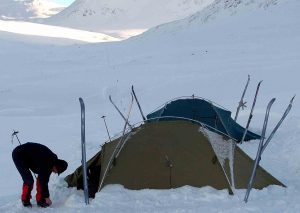 It’s important to pack all items in a big camping bag which is taken to the camping spot that you plan to use. However, you probably want to leave the camp every now and then for smaller trips outside your camp so it’s wise to have a smaller bag too.

The smaller bag is perfect to grab if you want to go fishing in a river, climbing a mountain or picking berries in the forest. It allows you to bring a day kit on your adventure, so you don’t end up in a sticky situation without essential survival items.