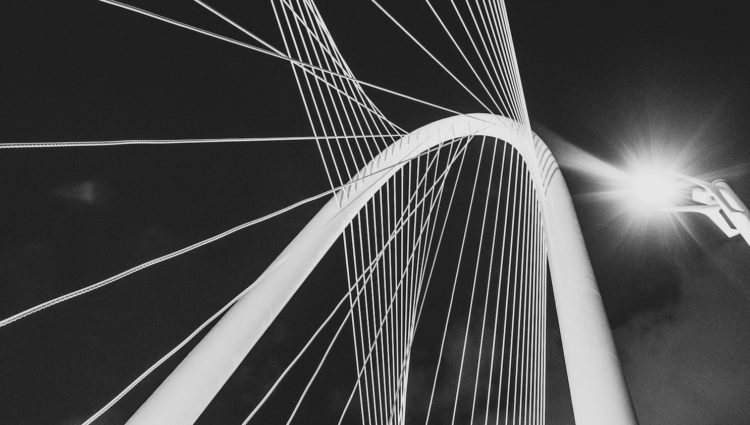 As wild as any megaproject ever seriously considered is the Bridge of the Horns, the massive structure announced in 2007 that would bridge the 28.5 km Bab-el-Mandeb, the strait separating Africa from the Arabian Peninsula (or, more specifically, Djibouti from Yemen) that joins the Red Sea and Gulf of Aden. The plan borders on pure fantasy: a massive six-lane causeway (including the world’s longest suspension bridge, which would be 5 kilometres long in order to accommodate the massive amount of ships that pass through the Red Sea via the Suez Canal) carrying up to 100 000 vehicles per day, along with four light rail lines that would carry up to 50 000 passengers per day, and gas and water pipelines.

Along with the bridges, two massive cities (one on the Djiboutian side, one on the Yemeni side) would be built. These cities would be known as ‘Al-Noor cities’(‘cities of light’). It is hoped that the cities would be models of sustainability and humanitarian values built entirely using green technologies and powered by renewable energy sources, as well as bring much needed economic stability to tiny Djibouti, turning the country into a major economic hub as a new go-between for Africa and the Middle East (the country already experienced a slight boom when neighbouring Ethiopia lost sea access after Eritrea achieved independence; Ethiopia now uses Djibouti as its major shipping point to the outside world).

In a span of just 15 years, the plan would be to construct a city of 2.5 million people on the Djiboutian side and a city of 4.5 million on the Yemeni side. Skeptics would point to the lack of a publicly-available master plan other than a mission statement, a couple of JPEGs, and conceptual videos like the one at the top of the page, as well as the lack of infrastructure to connect the project to(new, modern highways and railways would have to be built to connect the bridge to major cities like Addia Ababa, Nairobi, Jeddah, Dubai and Riyadh, all hundreds of kilometres away). It’s hard to believe that in that short of a time with so much to be built entirely from scratch in an relatively unpopulated area that the twin cities could be turned into the ‘financial, educational, and medical hub of Africa’, as was hoped for in the announcement ceremony in 2008.

Phase I of the project would see a 3.5 km long-bridge between mainland Yemen and the island of Perim as well as 4 km of highway on the island itself. Phase II would see 13 km worth of suspension bridges and 8 km of girder bridges connecting Perim to Djibouti, including the world’s longest suspension bridge mentioned above. As the waters of the Bab-el-Mandeb are up to 300 m deep, the bridge’s pylons would have to be 700 m high (400 m of which would be above water) in order to support the structure.

The project’s proponents are Tarek bin Laden (construction magnate and member of the wealthy Yemeni-Saudi family whose most infamous member was you-know-who) and Al-Noor Holding Investment LLC based out of Dubai. In addition to the cities to be built at each end of the Bridge of the Horns, Al-Noor cities are also proposed for Syria, Egypt, Sudan, and the Mecca-Jeddah corridor in Saudi Arabia. The Djiboutian government seems rather eager to proceed; it has already set aside hundreds of square kilometres of land for the development of an Al-Noor city on its end. The total cost of the bridges and cities would be US$200 billion, of which at least $50 billion has supposedly already been procured.It would certainly help in fighting the 40-to-60-percent unemployment rate and crippling debt currently seen in the resource-poor country; attempting to assist both Dijbouti and Yemen with their economic woes was indeed part of Al-Noor’s plan for the project.

For all of the proposals and agreements, there still has yet to be much action beyond opening ceremonies. If you’re wondering why you haven’t heard about the project recently (most news seemed to peter out around 2009), that’s because it’s been delayed since last year (around the same time construction on the US$20 billion Phase I was to have begun), as neither the Yemeni nor the Djiboutian government have signed a framework agreement that would give Al-Noor the go-ahead to proceed. Since then, news of the project has been rather nonexistent. Considering the Dubai debt crunch, ongoing turmoil in Yemen, and the fanciful nature of the project to begin with, we might not be hearing about the Bridge of the Horns or the Al-Noor cities for a while.