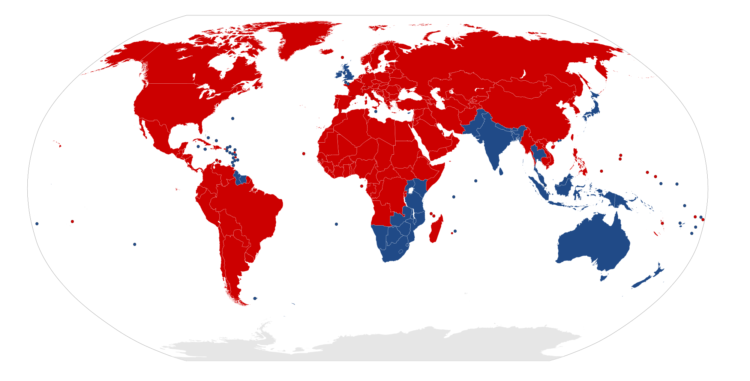 For all of the cultural differences, language barriers, and tension and strife on this orb, the various countries of the world actually seem to agree on a wide number of things: only Vatican City is not a member of the United Nations; all but three of 193 sovereign countries follow the metric system (Burma/Myanmar, Liberia, and the United States); only Monaco, Nauru and Vatican City are not affiliated to FIFA; only Andorra, Cuba, Monaco, Liechtenstein, North Korea, and Vatican City have yet to join the International Bank for Reconstruction and Development (one of the five institutions constituting the World Bank). The International Organization for Standardization even has 165 members. But there is a huge gap in one very significant standard: what side of the road to drive on. 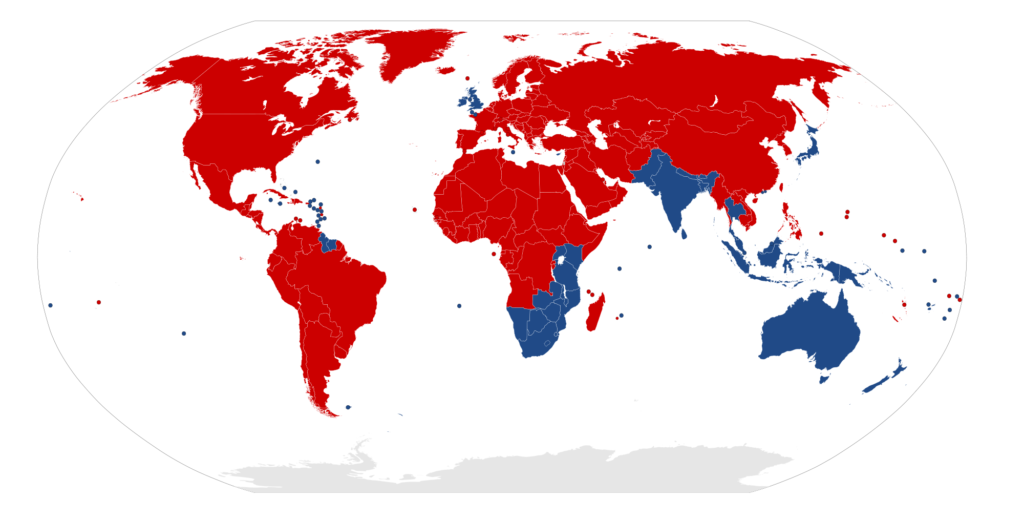 66% of the world’s population (163 countries and territories) drive on the right, while the remaining 34% (76 countries and territories) drive on the left. Currently, all countries have uniform rules on driving except China, which was a completely right-driving country until absorbing left-driving Hong Kong in 1997 and Macau in 1999 (which results in a pretty interesting-looking border crossing when one crosses into mainland China and has to change lanes). Countries switch driving directions more often than we think; just last year, Samoa switched to driving on the left after a century of driving on the right in order to allow its consumer to import cars more cheaply from left-driving Australia and New Zealand rather than the right-driving US. Since 1967, five countries have switched driving directions; the other four to do so (Sweden 1967, Iceland 1968, Burma 1970, Ghana 1974) went in the opposite direction, joining the majority of countries around the world in driving on the right-hand side of the road. In the early days of automobile driving, switching sides was much more common as countries got their rules sorted out.

The countries today which still drive on the left tend to share one thing in common: a British colonial legacy. These lands were either directly ruled by the United Kingdom (or, in turn, one of its possessions) or is in such close proximity to such countries that are just more convenient to align themselves that way. Which is why countries like Thailand drive on the left, or why Indonesia and Suriname stayed on the left long after the Netherlands switched to the right despite British rule having only occurred briefly in Java during the Napoleonic Wars. Three former Portuguese possessions (Goa, Macau and Mozambique) stayed on the left even when the rest of the empire switched to the right in 1928 precisely for reasons of proximity to countries that also drove on the left (similarly, it can be argued that the influence of the United States and Napoleonic France caused many countries to adopt right-side driving). There remain a fair number of border crossings where drivers are forced to switch sides; these are almost exclusively the province of Africa and Asia (the only such crossing in Europe is at the entrance to the Channel Tunnel in Kent, while the only such crossing in the entire western hemisphere is the Takutu River Bridge between Guyana and Brazil).

Why, the question may be asked, do we even have these differences in the first place? These differences predate automobiles; this goes back to medieval times and is basically a reflection of the fact that most people are right-handed. Countries, where wagon teams were driven by a person riding a horse, tended to drive on the right, mounting the horse on the left and whipping the horse with the right. Countries, where wagon teams were driven by someone riding directly in the wagon, tended to drive on the left, as the driver had to be situated in the right-hand side of the wagon to ensure he was making contact when attempting to the whip the horse and not ending up just whipping the side of the wagon. Being seated on the right-hand side meant staying to the left gave the driver the best line of view looking down the road.

Surprisingly, this rather firm difference between countries regarding right-and-left-side automobile driving is not reflected when it comes to rail traffic, where countries are all over the board. And let’s not even begin to get into the differences in traffic signals…

Texin, T. (2010). Why Don’t We Drive On The Same Side Of The Road Around The World? Internationalization, Localization, Standards, and Amusements. Available at http://www.i18nguy.com/driver-side.html. Accessed 1 November 2010.